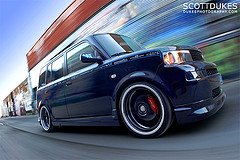 In early 2005, we were charged with building excitement for a new concept car from one of the big Japanese automakers. The car was to bow at the New York Auto Show, mostly to build the brand, not consumer demand.

We were still in the relatively nascent days of the blogosphere. Only a handful of blogging categories had succeeded in building decent spheres of influence, the auto sites among them.

So we asked (pleaded with) our client to capture some dramatic digital images of the car and allow us to plant them exclusively with a couple of blogs to kindle WOM. It was unclear whether the term blogseeding had yet entered our vernacular, but blogseeding we did with Jalopnik and I believe Autoblog, if not one other.

The bloggers were thrilled (even gracious) to accept our gift of giving their readers a first look at the car. To show their appreciation, they enhanced the JPEGs with glowing prose. It was a eureka moment for some of us, i.e., “we could pitch bloggers!” (even though their degree of influence paled in comparison to what it is today.)

Flash forward to early 2009. In reading CNET’s breathless account of Formula PR’s “glimpse into social media marketing” to introduce the new Scion, it was clear we’ve made considerable progress courting the socialsphere, but it still seemed, well, formulaic. Scion’s PR firm posted fresh images on Flickr along with a link to a microsite, and souped it up from there:

“Of course, Yahoo’s photo-sharing site wasn’t the only part of the process. ‘We uploaded the first photos of the new car on Flickr and linked those to our micro site. We also Twittered about the car and photos and reached out to some of the key online Scion influencers. From there it expanded to the Scion Facebook fan page and Scion message boards like ScionLife as people started to spread the news.'”

Back in ’05, Twitter, Facebook and micro-focused online communities were just glimmers in someone’s eye, and probably not even that. Perhaps our role is to simply feed these catalytic social media engines, YouTube among them, so they start firing on all cylinders. We can then recline and listen to them humm, or sputter as the case may be, which may require a periodic tune-up.

The CNET piece may not have sold more Scions, but it certainly stoked Formula PR’s marketing engines. If you want to see other social media case studies, here’s a comprehensive list of lists definitely worth checking out.