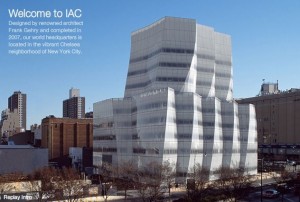 I had a chance to attend Digital Hollywood’s Advertising 2.0 confab these last two days — or at least two of the three keynotes that interested me. (I missed The Daily Beast’s Tina Brown.)

Yesterday, Business Week‘s Jon Fine took IAC’s eminently quotable CEO Barry Diller through the paces. Diller must have felt right at home. The conference was held on the ground floor of his company’s Frank Gehry-designed world headquarters opposite Chelsea Piers on New York’s far west side (photo above).

Today, I caught the spirited discussion between Bloomberg’s Andy Lack and Newser founder and Vanity Fair contributor Michael Wolff. The former wore his “Rodeo Drive” black cowboy boots, while the latter, upon close inspection, had an uncanny resemblance to Dr. Evil.

There was much to be gleaned from these tete-a-tetes, especially for those following the transformation of news production and consumption. Here are a few memorable quotes or paraphrases: 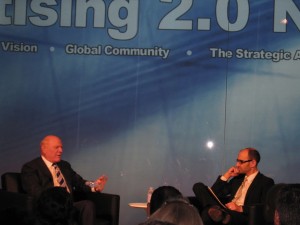 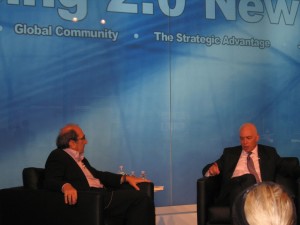 The Andy Lack-Michael Wolff session opened with a debate on the merits of quality journalism versus citizen aggregators and regurgitators. Lack argued for The New York Times. Wolff questioned the need for newspaper reporting… and newspapers, in general.

Personally, I side with Mr. Lack in believing that trained journalists play a seminal role in the media ecosystem, let alone a democracy.

The conversation touched Mr. Lack’s tenure as president of NBC News and the importance of “screens,” especially mobile ones. Here are some outtakes from that session:

I realize I didn’t capture all the worthwhile bites from these two sessions, so if you’re up for some unedited audio (of so-so quality), take a listen here:

(Also, catch the question to Mr. Lack from this PR person on the challenges Bloomberg TV faces.)