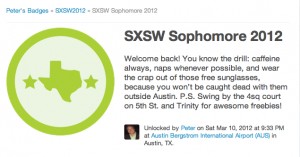 If you’ve been keeping tabs on this blogger’s Twitterstream, you’re (painfully) aware that I finally made my way to Austin for the 2012 South by Southwest Interactive Festival. No longer a Newbie, I earned the 2012 SXSW Sophomore Badge on Foursquare upon arrival at Austin Bergstrom Airport.
Whooppeee! Let the games begin. 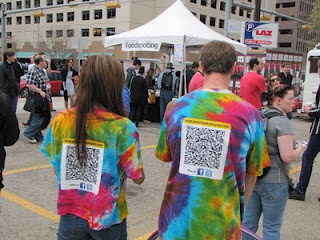 At last year’s SXSW, I waited until the final day to opine on the single trend I felt permeated the world’s premier gathering of entrepreneurial technologists. It was 2-D barcodes (or QR codes as they’re now known). They were everywhere – from the Chevy Volts and pedicabs that shuttled attendees around downtown Austin to the coffee cups, t-shirts, mousepads and bodysuits with which festival-goers interacted daily.

I don’t know just yet what cool product or killer app will emerge this year, though I did see that my friends at (the soon-to-be CNN sub?) Mashable are keeping tabs on the most buzzed-about SXSW startups. The list included Highlight, a geo-location mobile app that attempts to tackle the problem of capturing in real-time one’s FB friends in physical proximity to the user. (It also allows randoids using the app to know your coordinates.)

The app benefitted from the Arrington-Scoble Effect. Mr. Arrington, the founder and former editor of TechCrunch — and now venture capitalist who’s invested in Highlight — used his klout to set Twitter tongues-a-waggin a week before SXSW started, which include that of Mr. Scoble who took a more judicious approach. I’m sure others startups with competitive solutions are crying foul at the media kickstart Mr. Arrington heaped upon his investment.

No matter. Highlight is not highlighting this blogger’s time here in Austin. Frankly, I was impressed by the prospects for LISNX (local instant social network) whose developer I recently befriended. It attempts to tackle the some of the same challenges but it is not at SXSW, nor publicly available…yet.

As for this year’s winner, I would only ask one question: What would SXSW be without Foursquare?

The geo-local check-in service launched at the New York Tech Meetup in 2009 and then took SouthBy by storm. Back then, 4Sq and Austin-based Gowalla were going head to head. As of this week, however, Gowalla is no more. Don’t feel sorry for them. Facebook just bought the company and swallowed their talent…just in time for FB’s IPO.

This year, Foursquare is everywhere at SXSW. It is the perfect dopamine-releasing app that melds the physical and virtual worlds in real time. It’s the ideal way to keep track of the whereabouts of SXSW’s movers & shakers as they navigate the cacophony of panels and parties that abound. Company founder Dennis Crowley joined Shira Lazar and Zappo’s Tony Hsieh on stage in Samsung’s Blogger Lounge yesterday:

“We’re part of the fabric of what goes on here. It’s our third year here. We now have 100 employees and 20 million users. We’re on a rocketship course.” 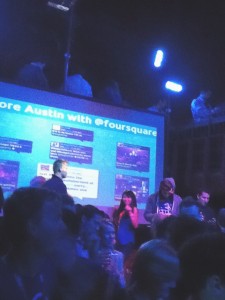 The company also throws the hottest party at SXSW, which may or may not be relevant to its future prospects – but it sure can’t hurt. Here are some of my 4Sq check-ins thus far (in reverse chronolgical order):