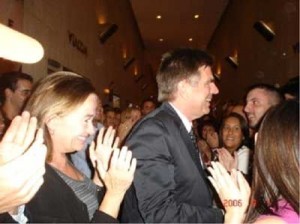 Earlier this week I posted an item on the recently relieved Viacom chief Tom Freston. Contrary to its title (“Freston’s Fatal Flaw”), the post did not reflect badly on the iconic music and cable TV executive. Rather, it focused on the many extraordinary contributions he made to the company (and the industry), including a number of digital initiatives that seemed to contradict the stated reasons for his dismissal.

Today, I attended the annual luncheon for the Center for Communication (a great organization) where Mr. Freston was honored (and roasted) by the likes of News Corp’s Peter Chernin, MTV’s Judy McGrath, and keynoter Steve Colbert. So? What does any of this have to do with PR???

Here’s why. Mr. Freston came on last. Here was a man who ruled the roost for so many years; someone who had “thousands of Viacom employees,” many in tears, descend to the company’s Times Square lobby to bid him farewell on his final day. (Pictured at right.)

If you’re his PR counselor, how would you advise him on what tact to follow for today’s luncheon at The Pierre? What exactly should he say? What wisdom could he impart to his former colleagues and the hundreds of media and entertainment industry movers & shakers who gathered with curiosity (and reverence) to hear Tom speak — from News Corp’s Rupert Murdoch to Page Six’s Richard Johnson?

The founder of MTV did not disappoint. He took a completely self-effacing approach by first explaining that he finally got around to buying a computer. Then he showed his MySpace page (with Bill Ford, Carly Fiorina, etc. as his friends), and ended with a music video, shot throughout his NYC apartment, in which he lip-synced his way through Daniel Powter’s “Bad Day.” (Below)

Tom, this approach struck exactly the right chord — a feat that we, as PR pros, continually strive to achieve. You earned the standing ovation you received from this most discerning audience of your (former and future) peers.