Here’s the first clip: “3D without glasses or cross-eye HD:”

I can’t count the number of times I’ve advised clients that playing a video on the Jumbotron in Times Square NYC to generate buzz is a colossal (literally) waste of time — New Year’s Eve as an exception. I mean how can one really expect the myriad tourists passing under the Jumbotron to spread the word nationally, internationally? Maybe I was wrong. A group called Consumer Watchdog posted this 90-second clip taking a shot at Google chief Eric Schmidt, and it caught fire on Twitter and elsewhere. Go figure. Here’s mainstream coverage of it from WSJ Digits.

I’ve enjoyed Brian Solis‘s various takes on trends in social media. Here’s a video that popped this week , which used the term “interest graphs” for the first time (at least for me).

Just when we thought the popularity of Chatroulette succumbed to one too many penises, the service last week attempted to relaunch with a new look and new controls. paidContent characterized the site as “a fleeting internet meme.” Still, some enterprising movie marketer used the service to promote the flick “The Last Exorcism.” Judging from the 2.7 million hits on YouTube, it worked.

The YouTube phenomenon of a chance encounter with a double rainbow goes Windows commercial, much to Mashable’s chagrin.

Finally, Google (and Chrome) assisted filmmaker Chris Wilk in the creation of this video to (personalized) showcase of HTML5. Click here to launch the clip. 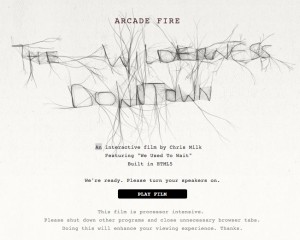