This week’s edition of Video Views looks at the iPad, a very cool Photoshop editing app, one agency’s take on the 25 defining moments in PR, a chat with LinkedIn’s social media manager, Google Maps for cyclists, and Facebook as a bank(?).

Forget Mossberg and Pogue. New York Times intrepid media reporters (bloggers, columnists and Twitterers) David Carr and Brian Stelter got their hands on the iPad and gush on what it portends for media delivery and consumption moving forward.

Click here to watch (since this particular NYT video is NOT embeddable…hmmm). 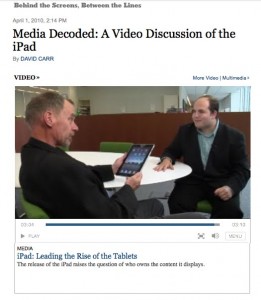 Pollack PR & Marketing Group pulled together this clip of its “25 Defining Moments of PR” to celebrate the L.A.-based firm’s 25th anniversary. Would you say that the next 25 years of our industry’s most defining moments remain inextricably tied to major news events? I wonder.

I follow Mario Sundar, but didn’t realize that he was social media manager for LinkedIn. Now, thanks to PR Week‘s recent SF–>Boston transplant Aarti Shah, I do. Still, why isn’t this video embeddable? 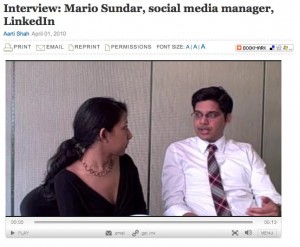 Cyclists take note: Google Maps now offers directions for those traveling by bike. HT to The Onion’s Baratunde Thurston (@baratunde), a most eclectic person to follow on Twitter.

eAcademy‘s Thomas Power‘s explains the social media order, i.e., Twitter, Facebook, Friendfeed and Google, and a “what if” scenario of Facebook getting into the banking biz. Just think of the implications for p-to-p lending. (HT to @louisgray)