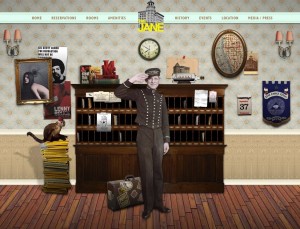 I’m torn. Two of my close friends, both in the PR biz, are currently embroiled in an epic PR battle on the streets of Jane in New York City.

Nancy Friedman runs one of the top travel and upscale destination PR shops in the biz. While Ken Frydman and his business partner Richard Schwartz have built a great local PR and PA practice after cutting their teeth in the halls of power in city government and elsewhere.

The two adversaries also happen to be close personal friends themselves.

Mr. Frydman is using the MSM and a blog or two to accentuate a community’s displeasure with the nightly crowds drawn to a trendy hotel in the mostly residential West Village neighborhood. The proprietors of The Jane Hotel are said to prefer a negotiated truce with their local, vocal antagonists, while the latter group simply wishes to shutter the hot spot altogether.

I have personal memories of this neighborhood when it first started morphing away from the rough and tumble trade. My old buddy Jeff Ross, Conan O’Brien’s long-time producer, shared an apartment at 24 Jane Street back in the day. I digress.

The local vocals in this fight had pinned their fate on a rather substantial New York Times Sunday real estate story, until it was learned that the author of the piece appeared to have a pony in the race. The story was killed.

My favorite line: when asked whether it made sense to hire a P.R. company, the head of the Greenwich Village Block Association, who’s sitting on the sidelines for this one, responded:

â€œWhy do you ask that question? Is there a down side to hiring P.R.?â€

I also liked PR Newser‘s take in which Jason asked Ms. Friedman for a clarification on her assertion that positive comments in support of the hot spot are being removed from some community blogs:

“Positive blog posts about the Jane are getting taken down on some of the sites and blogs who are supported by the neighbors. I thought blogs were about dialogue and not just one-sided.”

We’ll see who prevails in this one. Again, I can’t take sides, but it’s certainly interesting to watch these PR pros, with distinctly different styles, do battle.