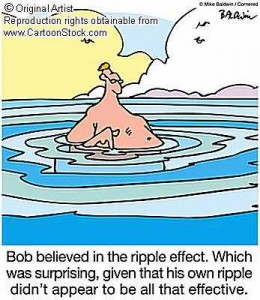 For as long as I can remember, certain mainstream media outlets had the catalytic power to set the national news agenda. We all know the dead tree outlets of which I speak.

In the last 12-18 months the dynamics of how a story catches fire began to shift – big time. (No, not every story.) While those mighty mainstream influencers are still pretty mighty, these days the smart PR set turns to the blogosphere for its kindling wood. (For more on this, be sure to read Brian Solis’s take on Scoble’s take.)

Yesterday, The New York Times ran a front page story that…shock and awe…reported how the Clinton campaign gave its ideological antithesis Matt Drudge first dibs on a pro-Hillary piece of news. Jeff Jarvis and many others naturally took notice.

The Clinton PR ruse worked like a charm as the authoritative Drudge drove the national story of Mrs. Clinton’s fundraising prowess at the expense of Mr. Obama. (There’s just something about an exclusive to get those journo juices a-flowing.)

I’m working with a client whose A-list celebrity spokeswoman signed on to promote a worthwhile healthcare cause. We gave the story first to TMZ (after my buddy Richard Johnson turned it down), and it took off across the land from there. “Access Hollywood” and many others ran with it spurred by the authoritative TMZ’s validation.

A while back, this blogger wrote about a new media pecking order in which the most influential bloggers have gained the upper-hand for setting the national news agenda — in spite of fickle audiences spawning in a 24/7 news flow.

From Arrington to Huffington to Levin (and even Drudge, if you must): if you’re not cultivating those A-list RSS-fueled journos that operate in your client’s space, you soon may be guilty of PR malpractice.