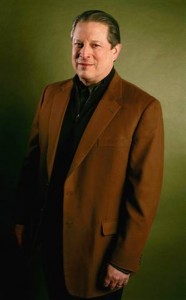 Today’s Washington Post has a front page piece featuring former VP (and would-be President) Al Gore on his latest star turn: the Sundance premiere of “An Inconvenient Truth,” his film documenting his efforts to raise awareness for the dangers of global warming. Looking (unfortunately) more like the John Travolta character in “Get Shorty” than the policy wonk he is, Mr. Gore does deserve credit for his steadfast support of this hot and continually hotter issue.

It was 1997. In a speech at his alma mater Stanford University, BP CEO Sir John Browne was about to make history (and in so doing remake his company) by parting with the oil industry to declare global warming a force to be reckoned with. The visual culmination of his defection occurred at a news conference at a northern California solar panel manufacturing facility in which BP was making a significant investment. VP Gore was the headline speaker.

It’s unclear whether Mr. Gore’s film will play in Peoria, but the use of the big screen to influence public opinion has caught on big time since the days of Michael Moore’s “Roger and Me.” Sundance can be a filmmaker’s springboard to the mainstream, but for most, it only offers an all-too-brief glimmer of fame.

Perhaps this will be the media that finally catches on for Mr. Gore? After stints in radio, cable TV and a just-announced book deal, he’s running out of mediums. Podcasting, anyone?