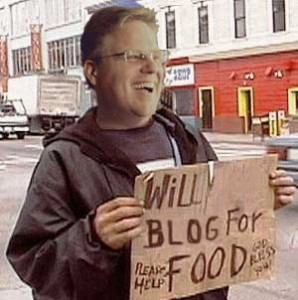 Shel Israel pointed to his Naked Conversations’ pen pal’s heartfelt post yesterday in which the inimitable blogging A-lister and general good guy Robert Scoble threw his hands up, and his keyboard down, to lament the sorry state of discourse on his blogging and twittering platforms:

“Much of what I read over on that Silicon Valley gossip site lately isnâ€™t true and they have demonstrated over and over that they really donâ€™t care about the truth. It really depresses me cause I thought blogging would be a tool for humans to get smarter, not stupider. Depression isnâ€™t fun.”

Inspired in part by the physicality of holding a 19-day-old baby (something you can’t do in Second Life), Scoble has decided to take a “sabbatical” to sort things out:

“In our book Naked Conversations I wrote that a good blog is ‘authoritative and passionate.’ Truth is that when I looked at Steve Ballâ€™s baby I realized Iâ€™ve been neither. Iâ€™d rather go hang out with someone who is building something interesting.”

Having met Mr. Scoble on a couple of occasions, and having tried to keep up with the revolution on which he so assiduously reports, I can say with conviction that he is among the most authoritative and passionate persons I’ve met in this space, which brings me to the bigger question:

If Robert Scoble can hang it up, albeit he says temporarily, where does it leave the rest of us?

His post yesterday reminded me of the post in which another citizen journalist pioneer Dan (We the Media) decided to cease sell his blogging experiment Bayosphere blogging as if to say “What’s the point?” Fortunately, Dan’s voice did not retire to blogger heaven. He directs the Center for Citizen Media, a project affiliated with Harvard University’s Berkman Center for Internet & Society and the University of California-Berkeley Graduate School of Journalism. He continues to blog here.

Then there was Dave Winer who ruminated in March 2006 about hanging it all up. (He didn’t.) From CNET at the time:

“Winer, who helped develop and promote, is just one of several high-profile to leave the game of late. Jason, the daring soul who quit his Web design job in the hopes that micropayments from readers would support him, recently called it quits. And that followed Dan Gillmor’s news that he’d be ending his San Francisco Bay Area-focused blog, Bayosphere, to explore new projects.”

Scoble’s lament is a little disconcerting for the many millions who churn out reasonably passionate copy day in and day out — for little or no money. For many, Scoble was the inspiration. Let’s just hope the Scobleizer is true to his word when he says:

“Iâ€™ll be back blogging when I can add value again…and while Iâ€™m not blogging Iâ€™d love it if you left some ideas on things youâ€™d like me to learn for when I get back.” (Filed under: scoble @ 3:13 am #)