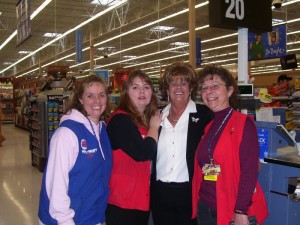 So Joe Francis is out of jail. Here’s a guy who had the genius idea to turn his video cameras on sloppy drunk female Spring Breakers, or at last those willing to publicly expose themselves. He made millions, but paid the statutory price with jail time.

Today we learn that another video production company seeks to make millions — $145 millions to be exact — by selling footage, which to many, depict even greater scenes of depravity.

Tech Dirt reports, and others have picked up, that the former video company that shot Wal-Mart’s internal employee confabs for the past 30 years is out peddling the footage.

The company “discovered there are actually plenty of people out there interested in viewing such material — especially if it involves managers prancing about in drag at an executive meeting.”

So what could be more marketable than Girls Gone Wild?

“Clips of male store managers parading in drag in front of thousands of colleagues as they all sing the corporate song, employees mocking dangerous uses of a product sold in its stores, and even founder Sam Walton referring to then non-executive director Hillary Clinton as ‘one of us’.”

“To date, there’s been tremendous interest in the videos by those involved in various lawsuits against Wal-Mart, including plaintiffs’ lawyers and union critics with a bone to pick with the world’s largest retailer.”

Wal-Mart has offered the company $500K to take the footage off the market. Me thinks that number will rise. Says a Wal-Mart spokesperson:

“…we did not pay Flagler Productions to tape internal meetings with this aftermarket in mind.”