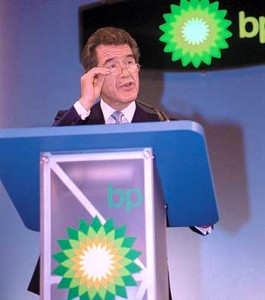 It didn’t get much pick-up here. In fact, I think I only saw a brief Reuters item in The Times. But BP CEO Lord Browne’s announcement earlier this week on his company’s auspicious plans to make an $8 billion investment in alternative energy sources further bolsters and differentiates this socially responsible company at a time when the spotlight on the oil industry is especially harsh. Is this simply a ploy to deflect the criticism?

The answer is a resounding no! Some years ago, I had the fortune of representing BP as it broke with the industry to acknowledge the potential dangers of global warming. It was a bold, risky, but earnest move, which enabled BP to completely recast its corporate reputation. The company’s new and continuing commitment to do good, has allowed it also to do well. Kudos to Lord Browne for paying more than lip service to the environment.