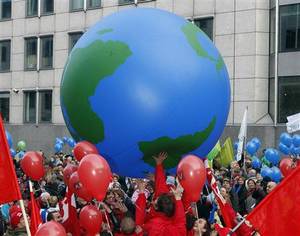 At the gym this morning, I happened to catch a CNN promo for its Campbell Brown climate segment: “Climate Conspiracy? — which called the very science behind global warming into question. Huh? Sweeps month was last month, wasn’t it?

It’s clear that CNN, and most of the MSM, have fallen prey to a still-unknown partisan who strategically leaked a decade-old email to catalyze the current controversy concerning climate change.

Whomever was behind the leak should write it up as a case study and submit it for a Silver Anvil or PR Week Award. The conversation it has spurred has succeeded beyond anyone’s dreams. (I’m sure the partisans who leaked the typewriter news that debunked CBS News’s diligent reporting of an AWOL George W. Bush also felt the same way about their PR success.)

Just this morning, the Washington Post published a ghost-written op-ed on the climate leak carrying the byline of someone with less-than-a-little knowledge on the subject. Media Matters and others called out the newspaper for its own editorial contradictions. But it’s too late. The strategically timed meme has taken hold.

Many PR pros, most notably those operating from the Beltway, might welcome a media that so easily succumbs to such PR chicanery. I’m not one of them.

It’s one thing to create and syndicate original content directly to audiences for the purposes of advocating a POV (with sponsors clearly identified). It’s entirely something else to pull the wool over the eyes of a lazy, indifferent, or careless journalist to advance one’s perspective.

In working over a period of eight years to have the World War II Memorial built on our National Mall, I will never forget the equal attention the news media afforded a very small group of adversaries. They had two WW II vets opposed to the Memorial on the Mall. We had millions in favor of it. Yet the news media gave equal space to each, and often more to the squeakier adversaries.

From then on, I have learned to prefer (and appreciate) a skeptical fourth estate’s scrutiny of the “story” with which they’re confronted, versus an echo chamber of media that glom onto the meme of the day. Why? Because editorial bias can work both ways. With the fact-based set, at least there’s a compulsion — on both sides of the PR-media equation — for grounding in reality.