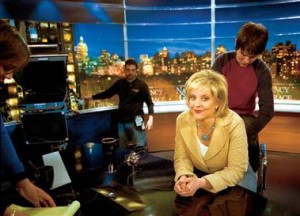 As this blog and others pull a Monday morning quarterback on the handling of the Kramer and Regan crises, the New York Observer makes some observations about another crisis presently in full bloom, but without the same MSM attention as the others.

It revolves around CNN’s brassy and bossy blonde legal eagle Nancy Grace and the crisis work that one of the nation’s most esteemed firms has done, is doing, or is no longer doing for her. (Choose one.)

Some say that Ms. Grace’s cross-examination of a young mother about her missing child may have been the catalyst for the mother’s suicide the day following her taped appearance on the show. Sensing a catastrophic career fallout, Ms. Grace retained a friend of her executive producer to resurrect her tarnished image.

Now I’m not one to second guess a firm like Citigate Sard Verbinnen, but if the Observer’s recount of the less-than-graceful strategy is accurate, it’s no wonder that the outspoken TV host finds herself in an even deeper hole today. Here was the PR pitch:

“The letter, a copy of which was obtained by The Observer, proposed a story on Ms. Graceâ€™s upcoming trip to Florida, where she would join the boyâ€™s father, Joshua Duckett, at an outpost called Team Trenton Headquarters. From there, Ms. Grace would broadcast her show each night, confer intimately with the police and continue to shine her national klieg light on the case of the missing 2-year-oldâ€”undaunted by the tragic fate of his mother, who, the letter noted, ‘committed suicide after appearing on her show.’

Ms. Cordasco [Sard’s crisis expert] mentioned parenthetically that Ms. Grace might even ‘go diving’ in search of Trenton. CNN could provide footage, or Ms. Grace would happily do a ‘video diary.’

As near as can be ascertained, no one bit.”

Here’s the problem, folks. This “pitch” was perceived pure and simple as a public relations ploy by those upon whose ears and desktops it fell. No journalist wants to be spun, and this smacked of spinning.

What’s unfortunate is that Ms. Grace was probably earnest in her offer to go out on the limb to help find this missing child. Unfortunately, this PR orchestration (seemingly to gain reputation points) struck the wrong chord:

“‘A lot of the media feels like we coordinated our efforts around Nancy Grace and her show coming to Florida,’ said Capt. James Pogue of the Marion County Sheriffâ€™s Department. ‘And honestly, that is not the truth. ‘”

“On Nov. 22, Lauren Ritchie, a columnist for the Orlando Sentinel, pounced on Ms. Cordascoâ€™s talking point. ‘Just so the truth is known, Leesburg police did not invite Grace to come here, and when questioned about it, the public-relations firm backed away from that claim,’ she wrote.”

Lesson learned: put the newsmaker front and center, i.e., stay out of the story.