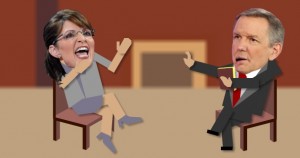 You may not believe it, but most reporters at the leading news organizations take their trade very seriously. So much so that any hint of taint in their journalistic pursuits raises all kinds of red flags within their news organizations.

And these days, with no paucity of pundits, the prospect of getting red flagged for a breach in journalistic ethics is amplified…sometimes by design. It’s therefore not surprising that the Republicans have consistently cow-towed the fourth estate. It’s a very effective strategy for keeping truth-seeking reporters in check..

I’ve been thinking about the decision by McCain operatives agreed to let ABC everyman Charlie Gibson sit down with that lousy Mom Sarah Palin. You know, the faux reformer with the preggo teen daughter and drugged-out son who’s chosen to abandon her mentally disabled baby in search of celebrity.

Don’t expect Campbell Brown stickin’ it live to Tucker Bounds here. In fact, if Gibson does go out of bounds, do expct the McCain strategists to cast him as one of those “liberal media elitists.”

I wonder what the ground rules were for this “exclusive” celebrity interview? Absolutely none, ABC News brass will insist. Ahhh, but those ratings and a “20/20” boost too. It’s simply irresistible! Surely they’re aware of McCain campaign manager Rick Davis’s edict in which he appeared on state-owned TV declaring there will be no Palin interview “without respect and deference.”

Deference, huh? Do you think ABC agreed to defer to Ms. Palin?

Now Charlie’s come a long way in honing is hard news cred since his days bantering on GMA. And for sure he doesn’t want to be viewed by his journalistic colleagues as a wuss. But having negotiated, yes negotiated, my share of high profile celebrity interviews over the years, I can assure you that some ground rules are in place for this particular interview.

Here’s a possible look at Gov. Palin’s interview rider (to protect the guilty):

Also, since it is taped, I’d like my PR consiglieres on hand in case what I say veers off-script and needs to be re-stated.

(And to think this blogger was poised to write about the thrashing Michael’s restaurant took in today’s New York Times. Now there’s a journalist who’s not afraid to sling some hash!)