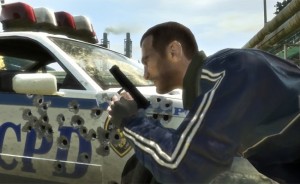 For the uninitiated, the title of this post happens to be the biggest story in the video gaming industry so far this year. The long-awaited release of Take-Two Interactive’s fabulously violent franchise “Grand Theft Auto IV” may not surpass Microsoft’s release of Halo 3, but many predict it will come close.

First, Take-Two, the company, had pretty much hit the skids two years ago. Retailers pulled from the shelves the previous version of GTA for objectionable content, and the firm itself suffered a healthy does of financial impropriety leading to a management sweep. On top of that, the leading player in the biz, Electronic Arts (think Madden and Woods), just came in with an unsolicited takeover bid, which Take-Two thus far has fended off.

Company CEO Strauss Zelnick, hardly a shrinking violet, believes the bigger the GTA IV reception, the bigger the payout for his company (and for him) from EA. Meanwhile, the game itself must out race the anti-violence crowd to ensure it doesn’t incur the wrath of regulators as did its predecessor.

One especially vitriolic detractor allegedly pulled the Jewish mother card as a means to toggle up pressure on Zelnick to do the right thing:

“Your son last week was reported to have said the following about Grand Theft Auto IV,” the letter allegedly began. “‘We’ve already received numerous reviews, and to a one, they are perfect scores. My mom couldn’t write better reviews…’ Taking your son’s thought, I would encourage you either to play this game or have an adroit video gamer play it for you. Some of the latter gamers are on death row, so try to find one out in the civilian population who hasn’t killed someone yet.”

I’m no fan of violent video games, as my review of Halo 3 demonstrates. Still, the queues and reviews for tonight’s release are in full throttle, which will invariably translate to turbo-charged media coverage and big sales. Mr. Zelnick is en route to extracting from EA his price, and a much needed road trip.