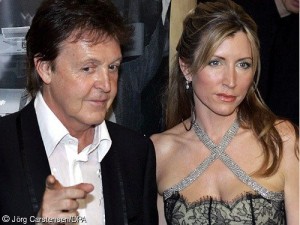 Heather Mills, Sir Paul’s second wife, promises to do a number, of the non-musical variety, on the former Beatle’s carefully honed public persona in this, his 64th year.

“Miss Mills, 38, claims Sir Paul stabbed her in the arm with a broken wine glass, pushed her into a bath, grabbed her by the neck and pushed her over a coffee table. She also says he drank to excess and took drugs.”

No, it can’t be true! Drugs? Ahhh, that explains Magical Mystery Tour.

In either case, this most acrimonious divorce is headed to open court where the couple’s dirty laundry will make the White Album blush.

“She is said to be ready to back up her claims with recordings she has described as ‘dynamite’.”

So how would you advise Sir Paul to navigate this full frontal assault? A) Pay Heather the $825 million British Pounds she seeks? B) Play hardball in the court of public opinion? Or, C) Try to maintain some semblance of dignity? The answer appears to be a combination of B) and C) Let others do the dirty work while you stay out of the limelight.

“Sir Paul has refused to comment on any of his wife’s allegations in public, apart to say he plans to ‘vigorously and appropriately’ contest them. In private, however, he is said to be ‘incandescent with rage.’ A spokesman for Sir Paul would not comment on the latest allegations.”

Instead of directly commenting, The Times of London reports he’s getting “a little help from his friends” to balance the pre-trial publicity:

“FRIENDS and associates of Sir Paul McCartney stepped in yesterday to defend the singer in his acrimonious divorce battle, and to ridicule Lady McCartneyâ€™s claims against him. Details of the divorce papers were disputed by Geoff Baker, a senior member of Sir Paulâ€™s staff for 15 years. ‘To brand Paul a wife-beater is the most absurd f***ing claim anyone can make,’ he said.”

Ms. Mills may be singing “Baby You’re a Rich Man,” but Sir Paul hopes she’ll soon segue to “You Never Gave Me Your Money.”