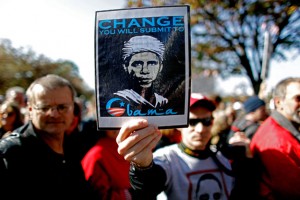 Dumb Michelle Bachmann had all her PR theatrics on display this week in DC. Her goal: to rally the right wing lunatic fringe to propagate anti-healthcare reform headlines, and in so doing, keep the cash flowing so she can hold on to her job. Ms. Bachmann is now ranked 8th among insurance industry beneficiaries.

She certainly pulled out all the props, including a copy of the healthcare bill wrapped in some kind of twine, a group Pledge of Allegiance (to which the Congressman who led it forgot the words), and a healthy heaping of political wack-a-dos who today pass for Republican leadership. This included crass conservative shock jock Mark Levin and House Minority Leader John Boehner who mistook the U.S. Constitution for the Declaration of Independence.

And let’s not forget the TV-ready nasty visuals Ms. Bachmann’s teabagger followers brought to her party (which didn’t seem to bother the Minnesota or Ohio Reps.). These included posters with images of bodies at a Nazi death camp, our President painted in white face a la The Joker, and an assault rifle with the caption “Come and Take it.”

Shocking, but sadly effective. One cable outlet called it “a major rally,” in spite of the fact that it only drew a couple of thousand people, while The Times paid attention in its paper edition, and on its The Caucus and Prescriptions blogs. Ms. Bachmann’s press aide, who quit this week, must be kicking herself.

In a battle of the Republican beauty queen bimbos, we couldn’t help but notice the PR tactics of Ms. Bachmann’s primary rival for the hearts and minds of America’s uninformed. Sarah Palin has a date to speak tonight at a pro-life event in Wisconsin. Instead of embracing the standard GOP theatrical tactics to garner media interest, Ms. Palin has banned all media from the event.

“But Palin appears to be doing her best to keep a low profile on this trip: no press will be allowed into the Milwaukee auditorium where she will speak and those who have paid the $30 admittance fee are unable to carry in cell phones, cameras, laptops, or recording devices of any kind.”

The Bachmann-Palin Overdrive contrasts with two more subdued, but nonetheless effective pro-healthcare reform public appearances this week. The first featured the brilliant Bronx HS of Science grad and first-term Congressman from Florida Alan Grayson. Rep. Grayson did the math and then took to the House floor to read the expected number of people who will die in every Republican Congressional district as a result of no healthcare insurance.

The second had our President make an unannounced stop to the White House briefing room to inform the press that both the AMA and AARP have endorsed the Democrats’ healthcare proposal. Some say this upstaged the Bachmann event.

Personally and professionally, I prefer my healthcare histrionics to be fact-based and more reflective of the crisis at hand. On these measures, Mr. Obama and Mr. Grayson clearly prevailed. If only the rest of cable-crazy America felt the same way, not to mention the media that caters to them.