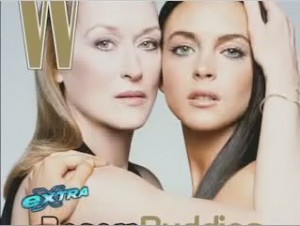 How incongruous were those fab tete a tete shots of one of the finest actors of our generation, Meryl Streep, with Lindsay Lohan, one of the flakiest and most misbehaved poseurs of the next generation?

Who’s borrowing from whom here? Could it be that Meryl wants to freshen her image with some of that US Magazine buzz, or is it Lindsay who derives the bigger reputational boost, after two mysterious hospitalizations, excessive promiscuity and the famous lapdance at Scores with that other model of good behavior Kate Moss?

Ironically, as the young Ms. Lohan sets out to cast away the negativity she’s brought upon herself, today we’re greeted with news of her mother behaving badly. It seems the senior Ms. Lohan and a female friend were stalled in the stall of the ladies room at a New York City club, or so reports the Post. When bladders in the queue were about to burst, someone demanded she part from her porcelain perch to which she reportedly threatened to have the person “fired.” From what? I don’t know.

The Lohans should perhaps consider getting in touch with Jared, so that their sordid nocturnal tales of debauchery fall below Page Six’s radar. Let’s hope the Robert Altman-directed movie that brought Ms. Streep and Ms. Lohan together in the first place does more justice to Mr. Keillor’s wonderful book, Prairie Home Companion, than the gossip columns have to one of its stars.