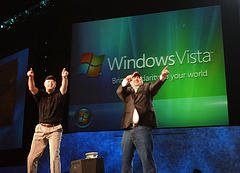 Sure, the launch of Vista will be big. And landing the PR chores for it was big news in the biz.

Let me digress for a moment. It seems like yesterday when the world was treated to the launch of Windows 95 for God’s sake. Now that was as hyperbolic as it gets. MS flew journalists from around the world to its Redmond, WA campus for fete after fete after fete.

I remember it well. We were working with Ziff-Davis Publishing at the time. (Greg Jarboe was my client.) In fact, I recently reminisced about it with ZD’s Jim Louderback, who was in NYC.

Our PR strategy entailed holding a pre-emptive media breakfast on the day of the launch, but featuring the top editors from ZD (versus Mr. Gates and the gang). Our mission: to help lay reporters “separate fact from the fiction” when discussing the highly touted new OS (and to build a little buzz for Ziff’s magazine brands). It worked like a charm. We infiltrated much of the mainstream media coverage.

For Microsoft’s big bash, I don’t recall any press-junketed scribes complaining about the over-the-top hospitality shown to them. It was all SOP. After all, how could the product be reviewed without free access (and free shrimp)?

That was a different era. It was before the blogosphere.

I’m keeping a watchful eye on the Vista launch. There’s a kerfuffle brewing, and I’m scratching my head. It seems that some citizen journalists were offered free laptops loaded with the OS, causing a handful to cry “bribe!” Neville shares his thoughts here. Jeremy here.

Why the big controversy? Without the free loaded-laptop program, how else can the new OS expect to gain trial (and attention) from those viral bloggers? Could it be that bloggers wish to be treated differently? Duh. Had the offer come directly from MS (versus its PR agency), would there be such a commotion? Hmmm. I wonder.