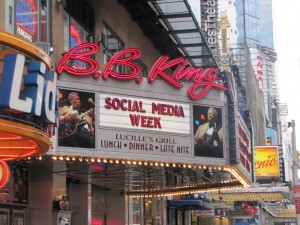 For last year’s Social Media Week event in New York, I had hoped to pull together a session that looked at how big events use social media tools and channels to drive awareness, brand esteem, web traffic and attendance. Instead we produced a PCNY co-hosted event called “Socializing the News” that featured the social media leads at The New York Times (who since joined @WSJ), NBC (who returned to HuffPost), Bloomberg (who joined HuffPost Live), CNN and Reuters.

This year, however, I was able to pull off the original idea with a session titled “How Social Media Drives New York’s Biggest Events.” On the panel were senior executives from Tribeca Film Festival, CMJ Music Marathon, The Times Square Alliance (think New Year’s Eve), BizBash and Mercedes Benz Fashion Week. (Reps from the NYC Marathon and Macy’s Thanksgiving Day Parade unfortunately declined.)

To open, I shared with the sold-out crowd of 200+ a quick social media audit in which I looked at how much authority each event had in a number of social channels.  Here are the tallies from Facebook, Twitter and You Tube. Interesting that Times Square rules Facebook.  Not surprised that Tribeca rules YouTube and Fashion Week rocks Twitter.

BizBash’s David Adler opened the session, which was held at a fab venue: B.B. King’s Blues Club in the heart of Times Square. Here’s a link to the audio of the presentations and Q&A. (RT: 1:18:00).  I’ve also listed the individual running times of the individual presentations after each section of highlights below:

Social media is changing the face of events. It is the most exciting time in the world to be in our industry. Events are really the new town square.  Anytime you do an event, you’re basically the mayor of that event. You own that ecosystem and own all parts of it. The people we have here are running municipalities for all practical purposes.

We have about 300,000 people come through the festival each year, 100,000 purchase tickets. We do hundreds and hundreds of screenings over 12 days, hundreds of events. Great content is the key to great social. For Twitter, its really about the news and of the now. Facebook for us is very nostalgic and industry based. Films. Great photography and great design still work no matter where you are…what brand…on Instagram.

Tumblr’s been incredible for us. We post content that complements content on our site. A place to geek out. YouTube is a big thing for us. We are a film content-based company. It’s a place year-round where you’ll come to find curation. We obviously do some stuff with Foursquare, we are an event, and our sponsor Bombay will come back this year to do a festival with map integration and custom badges. To each its own. Are you listening to Mary Meeker? We are. Or site will be optimized to a mobile environment. Social and mobile. You can’t separate the two.

This year we’re announcing a new event partner – EventBrite for ticketing. We chose them for their capability to do mobile ticketing. Great partners help. We have some great partners who also believe in the power of social to activate people on the street…Conrad Hotels, Diet Coke, Fandango, Heineken… This year we’ll be hiring a couple of correspondents to bolster our presence on Instagram.

In the category of social media, it’s a constantly changing world. We’re very lucky. Times Square is a very photogenic place. You expect the unexpected. Many different constituencies, audiences in Times Square. In the new Times Square we strive to touch hearts and build longer-term relationships with visitors, e.g., Broadway on Broadway, Outdoor Food Festival, New Year’s Eve Ball Drop, Solstice (a Summertime counterpoint to New Year’s Eve). Yoga in the middle of Times Square! Expect the unexpected, and amplify it.

Video art on Times Square screens. Yoko Ono’s Imagine Peace 12/21/12. Fifth year doing a Valentines sculpture. Touching people’s hearts. Met Opera in Times Square. Embrace diversity of NYC. (“freaks come out at night”) New Year’s Eve, we use many different channels, e.g., testing the ball, Dick Clark’s widow adding a crystal to the ball, confetti test. We have a number of different Twitter hashtags. We also partner with Livestream, which partners with Tumblr to build consumer-generated, behind-the-scenes content for New Year’s Eve.  It all adds up.

Social media is holistic part of comms strategy. For anyone that manages social, we know overload is always an issue. An event like ours doesn’t have the benefit of a New Year’s Eve ball drop moment where everyone’s engaged in the moment. We use social media to find those moments for themselves amongst everything that’s going on. Between artists and their teams, panelists, we have a huge network of people talking about what they’re doing. Hence our social media reach extends much further than we can do on our own. Out participants extend our brand via social.

We can track breakout artists on social media (though mentions, etc.) What we seek to share in social networks is info that’s a roadmap for attendees and sponsors. One benchmark for success: audience expansion. In 2012, we officially partnered with Tumblr to post best content – 60 million impressions from that tag alone. Tumblr is our fastest growing sm platform. We use social media feedback to shape our event.

Rachel Zoe had most social mojo of all the designers this year (in terms of live-streaming and video-on-demand). Vera Wang & Michael Kors in top five too. Digital technology has really changed the face of the process for designers to do business. Originally these were closed door events. Some of the designers are now using digital, making short films… Now we have wi-fi broadband in the media rooms.

We have so much content that comes out of our shows, and social media has enabled us to put morre value on that content and get it out to a much wider audience. It has a lifespan now. Our content has a life beyond the nine days in September and February. Social media allows designers to re-purpose their own content into their six-month marketing plans. We’re ultimately b-to-b, we’re not open to the public. We’re a closed door, industry only event. Social media is used to create a virtual version of our event to reach wider audiences. Social media has changed the business of fashion. Designers are not scared to share their collectons as they were in the past.