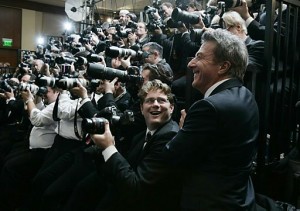 Now we know who’s behind Jennifer Aniston’s extreme exposure of late. He’s Hollywood publicist Stephen Huvane, who, according to a quick Google check, has served as the mouthpiece for many of the overexposed “A-list” flashes these last few years — from the two Jens (Aniston and Lopez) to Gwyneth, Hunt, Liv, Julianne and Brad Pitt.

Evidently, a measured approach to managing his clients’ public images is not in Mr. Huvane’s PR playbook. After writing about Ms. Aniston’s excessive media presence last week, I was again underwhelmed by her semi-naked appearance on the cover of GQ, and interview by phone (presumably clothed) with syndicated gossip doyenne Liz Smith.

Ms. Smith did reveal Mr. Huvane’s quid pro quo for granting access to his (now) newsworthy client, “Although our 10-minute chat was obtained with the promise â€” extracted by Jennifer’s p.r. sultan Steve Huvane â€” that no personal questions would be broached, I had the feeling Ms. Aniston wouldn’t have had a breakdown had we be [sic] been so bold. But a promise is a promise.”

Mr. Huvane, the younger brother of CAA EVP /uber-agent Kevin Huvane, one of six Huvane siblings from the Bronx, holds the cards — at least by Hollywood standards. If he directed one of his clients to stand on Hollywood Blvd. holding a sign, the client no doubt would oblige given the family’s position on the Tinseltown totem pole.

It kind of reminds me of my first boss, super-flack Bobby Zarem, whose brother headed the plastic surgery department at UCLA. Now there’s a brotherly connection worth exploiting!