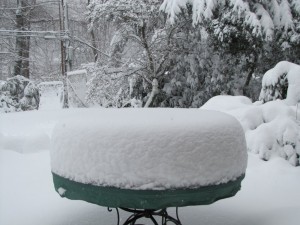 It may have incurred the wrath of the weather gods, but Accuweather is undaunted. The privately-owned meteorological service has encountered some stormy weather after deploying the term “snowicane” to describe last week’s approaching east coast snow storm.

(And I thought #snowpolcalypse and #snowmageddon were over the top!)

Both The Weather Channel and the National Weather Service called out their biggest competitor under the umbrella theme of “it’s not nice to hype mother nature.”

Here’s an excerpt from an AP story titled:

“‘It’s almost inciting the public, inciting panic,’ Evanego said of AccuWeather’s terminology.” ‘It’s not an apt analogy to compare this winter storm, which is really all about cold air and jet stream, with a hurricane, which is all about heat and … things of tropical origin,’ said Bruce Rose, vice president and principal scientist at The Weather Channel.”

Yet, in spite of the criticism for hyping the storm, AccuWeather media relations manager Justin Roberti today emailed me a news release with the following headline:

May it rain cats and dogs on those other weather forecasters, the release begged. If the word “snowicane” brings more visitors to our website, then we’ll continue to scare the bejesus out of our weather-worn fans.

Photo by Peter Himler, Friday morning, February 26 from his backyard in Manhasset, NY