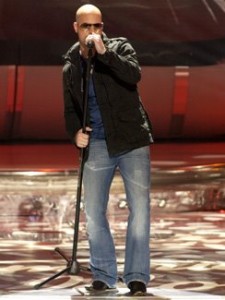 Hanging chads, questionable Diebold voting machines, Katherine Harris, Florida, Ohio… Just when you think you’ve heard it all on the voting scandal front, a new election brouhaha has emerged that may just put the others to shame.

No, it’s not some red state-blue state affair. Nor does it concern one of the political patronage appointments this administration is so fond of. In fact, even Silvio Berluscino ill-fated campaign pales in comparison.

The dispute involves the odds-on favored candidate Chris Daughtry. Whom you may ask? Come on, don’t you all watch the fair and balanced network’s “American Idol?” (I know I don’t.)

As if Paula Abdul’s alleged affair with a contestant didn’t test Simon’s crisis expertise, he now has to deal with allegations of voter irregularity. Mr. Daughtry’s fans claim that their phone votes were misdirected to his opponent, which led to the shocking ouster of the North Carolina crooner. They are demanding a recount.

When the show screwed up on the phone numbers previously, the contestants were given another chance to compete. Right now, it’s unclear how this will pan out. Let’s keep an eye on whether the producers “do the right thing.” Maybe the zealous NC fans made it all up? It sure wouldn’t be the first time we’re hearing of some unproven allegations emanating from that state.