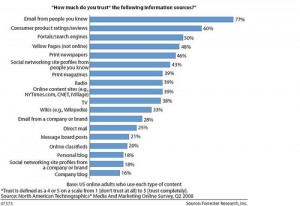 The socially smart set have jumped all over Josh Bernoff’s just-released study that ranked the trust-worthiness of various information sources. His provocatively titled post “People donâ€™t trust company blogs. What you should do about it” revealed that company blogs scored the lowest on Forrester’s version of The Edelman Trust Barometer.

Company blogs earned a paltry 16% ranking of “information sources they trusted the most.” By contrast, “Email from people you know” ranked highest with 77%, followed by “Consumer product ratings/reviews” with 60%, and “Portals/search engines” at 50%. Here’s a sampling of the groundswell of reactions to the study:

“Hereâ€™s how I responded on Joshâ€™s blog: While the data selected to base the report are great for generating a headline, theyâ€™re mostly irrelevant. Blogs are a both a communications channel AND a medium. Their value are not proxied well by prompted survey questions among general consumer populations. Their value is defined by the trust developed among engaged niches over time â€” such as with very specific customer and industry relationships. Hereâ€™s an analogy: Do you trust telephones? No. But you may eventually build trust with the people with whom you talk and do business with via the telephone.”

“While in the back of our minds, we all knew this was true. Corporate blogs, like Jonathan Schwartz Blog and Bob Lutz of GM frequently talk about one thing â€“theyâ€™re companies and their products. In fact, some would argue corporate blogs donâ€™t live up to the dream of naked transparency as we saw from Robert Scoble way back in 2006. Instead, many corporate blogs have become a rehash of press releases written in more of a human tone, yet fail to address the real conversation thatâ€™s happening in the marketplace.”

“First of all, there’s a clear problem in how the question is worded and/or response quality. You can see this in the data – almost a quarter of respondents report they don’t trust or are neutral about email from people they know. The intention of the question is clear – so why would this number not be very close to 100%? When I ran the question before, it asked about advertising in the channels. This version requires respondents to respond with their own interpretation – might be editorial, might be ads, who knows? But ultimately, 16% is only indicative of a larger issue. Consumers don’t trust company blogs for the same reasons they don’t trust corporate advertising (reference: Consumers Love To Hate Advertising). Today’s corporate messaging intends to spin, convince, and persuade consumers to buy stuff. Technologies like contact optimization and behavioral targeting only exacerbate the problem, helping marketers to target consumers like a sniper and drill them with a message that has been calculated for potential affinity. And now that consumers can fight back, they are, with technology: DVRs, satellite radio, ad blockers.”

“Whatâ€™s clear is that while there is a lot of work still to do, corporate blogs do work. The report specifically highlighted some examples of corporate blogs that are trustworthy â€” Dell, Rubbermaid, and Microsoft (all Blog Council members, by the way) â€” because they put their customer first and exist to help solve their problems. We completely agree. In fact, every single one of the speakers at BlogWell in September indicated that the purpose of their blogs first and foremost was to listen to their customers and help make their lives better.”

“For the last several years, new marketing experts have implored corporations to ‘join the conversation,’ namely through blogging. One problem: several years into the blogging phenomenon, not many consumers trust their blogs. Newer forms of corporate social media didn’t do well, either. Social networking profiles from brands were trusted by just 18 percent of consumers, the second least-trusted information source of the Forrester survey. Forrester concludes that many brands make the mistake of blogging about what they know most about: themselves. Instead, Forrester analyst Josh Bernoff urges companies to focus on customer problems and cater to brand fans. It helps to have a celebrity face, like Mark Cuban of the Dallas Mavericks, Amazon’s Jeff Bezos and Donald Trump.”

“Make no mistake. This is not a plea to give up on blogging. It is a plea to be thoughtful in how and why you blog.”

The report is available here for free with registration.