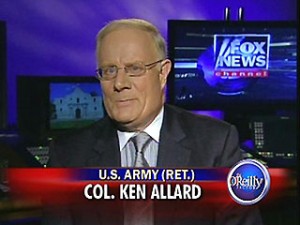 As one agency trumpets its new mantra of “authenticity,” we learn today just how deeply our government has subverted authenticity to sell its war-time policies.

In a 7600-word investigative piece on page A1 of today’s New York Times, reporter Doug Barstow outlines the extent to which this administration took (fairly standard) public relations techniques and nefariously used them to program hand-picked military “surrogates” for TV and radio “news” saturation.

“Torie Clarke, the former public relations executive who oversaw the Pentagonâ€™s dealings with the analysts as assistant secretary of defense for public affairs, had come to her job with distinct ideas about achieving what she called â€œinformation dominance.â€ In a spin-saturated news culture, she argued, opinion is swayed most by voices perceived as authoritative and utterly independent.

And so even before Sept. 11, she built a system within the Pentagon to recruit ‘key influentials’ â€” movers and shakers from all walks who with the proper ministrations might be counted on to generate support for Mr. Rumsfeldâ€™s priorities.”

The White House’s wide-spread deployment of supposedly objective military analysts to carry the message, a program in which Armstrong Williams and sketchy VNRs are only minor cogs, in effect usurped the media filter as the historical interpreters of government policy.

“Rather than complain about the â€œmedia filter,â€ each of these techniques simply converted the filter into an amplifier. This time, Mr. Krueger said, the military analysts would in effect be â€œwriting the op-edâ€ for the war.”

Many of these TV and radio-trained “analysts” had ties to defense contractors, and thus stood to reap financial gain from an escalation in the war. But the real motivation for their star turns in selling the war was not from pay-for-play, but rather through access to the halls of power:

â€œOh, you have no idea,â€ Mr. Allard said, describing the effect. â€œYouâ€™re back. They listen to you. They listen to what you say on TV.â€ It was, he said, â€œpsyops on steroidsâ€ â€” a nuanced exercise in influence through flattery and proximity. â€œItâ€™s not like itâ€™s, â€˜Weâ€™ll pay you $500 to get our story out,â€™ â€ he said. â€œItâ€™s more subtle.â€

The access came with a condition. Participants were instructed not to quote their briefers directly or otherwise describe their contacts with the Pentagon.”

In reading this story, nothing really surprised me. This blog has consistently covered just how this administration has tarnished the reputation of a mostly ethical public relations profession. The use of third-party spokespersons to advance communications agendas isn’t revelatory, and frankly, there isn’t a company, institution, political campaign or NGO that doesn’t use “surrogates ” to advocate a POV through the media.

However, I find it egregiously unethical when an enterprise, let alone our government, uses “independent” experts to knowingly distort the facts in a deliberate campaign to mislead the media and by extension, the public. To me, this subversive use of an age-old PR practice flies in the face of the our industry’s code of conduct, not to mention the burgeoning (and much-needed) authentic communications “movement” (if you’d call it that).

My second observation has to do with the sorry state of the news business. I have always felt that client-produced video footage sent to local broadcast news desks is not the culprit, assuming the source of that footage is made crystal clear. It’s always been my opinion that the recipient news organization has responsibility for assessing the news value and veracity of third-party video.

But the blurring of commentary and news (i.e., are Bill O’Reilly and Keith Olbermann even “journalists?”) has created a massive “hole” for opinion (posing as news) on the nations’ cable news channels, and to a lesser degree, broadcast news programs. We have seen the disastrous consequences of the journalistic failures of the cable and broadcast network news chiefs, under which these programs fall, when deciding who fills these holes…and the free ride they’re given once on the air.