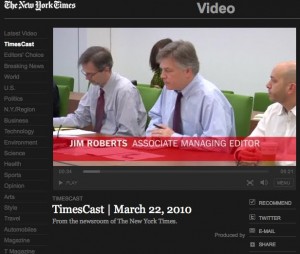 When I heard a week or so ago that The New York Times was prepping a daily video newscast, I wasn’t expecting much. Perhaps a talking head reading headlines from a teleprompter with some still images or graphics peppered in to make the point.

I knew not to expect globe-trotting TV news producers and their ENG crews feeding slickly edited packages to stream during the hour-long 1pm webcast. Economic realities couldn’t justify this.

Nevertheless, how pleasantly surprised I was to see the first daily “TimesCast” take us into The Times newsroom. And not just in the newsroom, but smack in the middle of the previously unseen “Page One” morning meeting. There was associate managing editor Jim Roberts (@nytjim) calling on his editors to provide the topline of what stories are in the pipeline (with two cameras no less.)

We catch a glimpse of managing editor Bill Keller, but more importantly hear from those who are closest to the most significant developments of the day. Direct questions from reporters to other reporters, recognized previously only by their by-lines. For me, the personas of ET’s “The Insider” didn’t hold a candle.

Not only was the report brisk, informative and engaging, but it opened the curtain on a news organization whose historical lack of transparency has contributed to its share of unwanted scrutiny in recent years. I’ll never forget helping The Times celebrate the 100th anniversary of the Ochs-Sulzberger family’s ownership of the newspaper. A crew from CBS “Sunday Morning” requested to shoot in the newsroom, but Times policy prohibited any filming in this vaunted space. (Eventually an exception was made.)

My how The Times are a changing. TimesCast — not unlike “The PBS NewsHour” — was made for discerning news consumers, and offers a sublime addition to the news report coming from a news organization at the top of its game. I only hope that this fresh look into the newsroom, and more importantly, the news decision-making process, will put to bed those questioning the value and fundamentals of quality journalism.