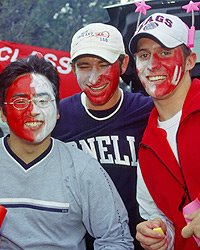 Of the seven colleges and universities that comprise the Ivy League, it appears that Ithaca, NY-based Cornell has the biggest inferiority complex. So much so that a number of students from the institution, frustrated by the administration’s lethargic pace, took it upon themselves to form an “image committee”.

Its mission: “to press the university into marketing and branding itself more aggressively, and to help it climb higher” in the hyper-important U.S. News & World Report rankings, according to today’s New York Times.

The committee’s first move? Have the bookstore create and sell more vintage hats and logo-emblazoned stuff. Hmmm. Other image-enhancing initiatives included a re-vamp of the university’s website and a look at ways to reduce the school’s average class size, a factor used to determine one’s standing in the rankings.

Does today’s Times feature story help or hurt the efforts to bolster the school’s image? After all, the piece does re-hash the shortcomings that led to the formation of an image committee in the first place. I think most alums will believe the story and what it says are net positives, i.e., “at least something is being done.” Also, to the committee’s credit, the piece did make mention of the strides the university has made in the selectivity department.

Finally, and not surprisingly, we learn of the committee’s dissection of the U.S. News report itself — a requisite undertaking in the college marketing biz today. Hats off to Big Red.