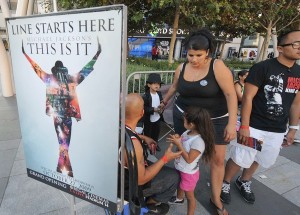 With Michael Jackson mania poised to start all anew, it’s curious to watch how Mr. Jackson, once k.a. “Wacko Jacko,” may emerge as a whole new fellow.

Here’s a tweet from the west coast editor for The Daily Beast:

KateAurthur Kudos to the Michael Jackson fans mad about the movie whitewashing the “grim truth” for the name of their website: this-is-not-it.com

Apparently, there’s so much “the crowd” will take when it comes to spinning the truth. But who’s to blame: Ken Sunshine, the Jackson family’s hired-hand whose firm orchestrated the fawning media events in the aftermath of Mr. Jackson’s demise, or SONY Pictures whose Jackson territory-HQ’d parent company spent $60 million for the rights to the new Jackson docu-pic?

My guess is both. Wasn’t it SONY that gave the LA Times an exclusive look at select portions of the new film in exchange for a glowing Jackson tribute this past Sunday? And didn’t Mr. Sunshine and company gloss over the singer’s death by conjuring every known media asset of the singer’s former triumphs, in effect drowning out anything that could be construed as deleterious to his legacy?

Can you blame either? Isn’t this how they earn their keep? SONY revives Jackson’s moonwalking days to draw boffo box office, while Sunshine earns re-invents Mr. Jackson so he’s worth more dead than alive.

It’s just that these revisionist tactics, while once sufficient to prevail with mainstream entertainment media scribes and programs, have less of an effect in today’s RSS-fueled media democracy. Here’s an excerpt from the release posted on the This-Is-Not-It website:

Who We Are : friends and fans of Michael, including some who were with him the last weeks of his life and who have witnessed to many of the events that led to his death. The latter group got so concerned about Michael Jacksonâ€™s state that on June 21st, they decided to stage the first step on an intervention. They wrote him letters asking him to stop the tour if he was not up to it. Michael Jackson received these letters on June 24th. The second step of the intervention was never to take place.

Again, I’ll be curious to see whether the film’s choreographed adulation will yield a citizen backlash, especially now that the statute of limitations has passed for the real truthsayers to emerge without being accused of having poor taste.