Lots doing from the world(s) of Jeff Bezos this week. First, we learn that Amazon is making a big play to “lure” us away from our eternal dependency on iTunes in favor of the company’s integrated Cloud Player MP3 Store. As The Verge led in its coverage:

“Amazon’s Cloud Player for PC is moving closer than ever to a full-fledged iTunes competitor today; the app now features an integrated Amazon MP3 storefront where users can buy songs and albums directly without visiting Amazon.com.”

PC huh?  I get it. That piece, bolstered by a sit-down between Verge editor Joshua Topolsky and Amazon’s CEO, was titled “Jeff Bezos Wants to Delight You: A Chat with Amazon’s CEO”. 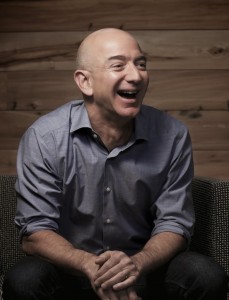 We then were treated to a news release, cleverly (or caustically) written as a series of tweets and posted to BusinessWire, that touted the company’s latest tablet — the Kindle Fire.

To its credit, Amazon’s PR team did get some decent traction from the tech cognoscenti in my Twitterstream, many of whom lauded the new device’s potent pixel power.

To its discredit, one editor, a perennial detractor of all things PR, had this to say about the manner in which Amazon’s message was delivered:

Finally, as if he wasn’t busy enough, Mr. Bezos made his first televised comments on his recent purchase of the Washington Post. On CNN, he said:

“For me, I thought the Washington Post is an important institution, and I’m optimistic about its future,” Bezos said. “It’s a personal investment. I’m hopeful that I can help from a distance in part by providing runway for them to do a series of experiments, in part through bringing some of the philosophy that we have used at Amazon to the Post.”

He also talked for 40 minutes with USA Today‘s Ed Baig, and others. A veritable whirlwind (and mainstream) media tour, if you ask me.  Oh. Did I mention that Mr. Bezos told NBC News that he wanted to travel to space?