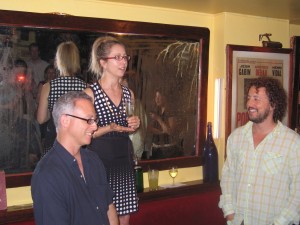 Great turnout for Laurel last night at a very understated bar in the East Village called Jules Bistro. It was where she and Russ Baker apparently hatched the idea for Media Bistro, which Jupitermedia snapped up earlier this month for $20 million plus. (Headline: “Bistro Born in Bistro”)

For those who don’t know Media Bistro, it’s an organization that offers career advice, seminars, job listings, social settings, and media news to an international community of journalist, PR and marketing types.

It also is parent to some authoritative industry blogs such as TV Newser, FishBowl NY, LA and DC, and Galley Cat. (Hey, Laurel, next time fly in FishBowl LA’s Kate Coe.)

Upon entering the jazz joint, celebrants were greeted by some exuberant young people at a table with pledge cards and literature about The Real News Project, which Russ Baker (pictured at left) founded and expounded upon following Laurel’s remarks.

Admittedly, I first confused it with Jay and Arianna’s crowd sourcing journo initiative “Off the Bus,” but soon realized that while both shared collaborative underpinnings, the Real News Project is unique in its aspiration to revive investigative journalism — something few will disagree has seen better days.

Baker himself has already done his fair share in this noble calling. (Would you expect anything less from Russ Baker?) What’s more, for those who ponied up to support “Real News” last night, Ms. Touby agreed to match pledges — two dollars for every one pledged. (Laurel, I hope my check for $500K doesn’t bounce.)

Also on hand were Allen Salkin of The New York Times’s “Sunday Styles” section (pictured on right) who mentioned to me that he was one of media bistro’s first instructors on “how to pitch stories,” a term that has different meaning for freelance writers than it does for the PR set. Laurel credited him with the idea that started mb’s popular workshops.

I also ran into my Men’s Lunch compadre Jon Fine who doubles as Business Week’s astute media reporter and Laurel’s husband — but not necessarily in that order. The scruffy Fine confided in me that he’s become a regular contributor to CNBC, which makes sense since that network’s Dow Jones connection could soon be history — no matter what parent GE says.