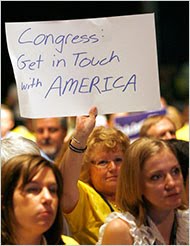 While on family holiday this past week, escaping just ahead of an expected brush with Bob, I took notice of the latest revelation about Beltway-based Bonner & Associates. Actually, my buddy Geoff Livingston tipped me off via a tweet that linked to a Grist.org piece outing the “grassroots” specialist firm.

Before I go there, I’m reminded of a panel on which I sat some years back. It was pegged to the publication of the book PR! A Social History of Spin, which alone should have forewarned me against serving as the panel’s sole PR practitioner. Seated next to me was the long-time chief of the Consumers Union, publisher of the venerable Consumer Reports.

Before the panel got underway, I approached the CU chief to introduce myself. As soon as I mentioned the name of my agency, she gave me a glinty look and made some snide comment. (I can’t recall whether her hand recoiled when I extended mine.)

It seems that several years earlier, a DC operative for my firm disingenuously contacted Consumer Reports posing as a member of a “consumer organization” to gather info on a particular issue. The ruse was discovered at the magazine and our firm’s fate was sealed.

As I contemplate the subterfuge with which Bonner & Associates is allegedly charged, i.e., posing as ethnic groups in districts of on-the-fence Congressmen to pressure them to withhold support for Pres. Obama’s health care plan, I reluctantly acknowledge that this brand of issues advocacy is quite widespread in our industry. The Sierra Club uncovered this one and wrote U.S. AG Eric Holder:

â€œ[O]ne of the most important â€˜honest servicesâ€™ provided by a representatives to his constituent is the service of considering the constituentsâ€™ true opinions and viewpoints when contemplating how to vote on a bill before Congress. This service cannot be rendered when the representative has been provided falsified or erroneous representations of those opinions or viewpoints.â€

There are countless PR, PA and grassroots “constituency-building” boutiques in the Beltway (and elsewhere) that mobilize or invent “like-minded” or cleverly named groups to advocate for or against any number of issues. Grist writes:

“Bonner sells itself as a manager and builder of grassroots campaigns, saying it can â€œfind and educate leaders from local organizations who share a legitimate stake in the issues of our clients.â€ In political circles, such firms are described as engaging in â€œastroturfingâ€â€”based on the view that the grassroots political communications they deliver for clients do not represent actual public opinion.”

Rarely are the corporate interests that bankroll these campaigns revealed in the ruse. A former Bonner employee even admitted as much.

It’s not that a private enterprise doesn’t have the right to have its voice heard, nor should it be prevented from mobilizing groups that share its POV. It’s doing so clandestinely without publicly revealing the financial engine fueling the effort that makes the practice so reprehensible.

Sure, the PR biz has taken its share of potshots from frustrated journalists who have an aversion to superfluous emails filling their inboxes. Yet, the practice of deception is a far greater danger to the legitimacy and vitality of the profession.

And don’t think the PA operations of the large, global agencies are immune to this insidious brand of astroturfing. Just yesterday The Times ran a piece about an anti-climate change initiative cloaked behind not one, but two screens: the cleverly named Energy Citizens, and its backer the American Petroleum Institute.

Would the average citizen guess that ExxonMobil and the other big oil producers are the real forces behind the initiative? Energy Citizens certainly won’t tell them.