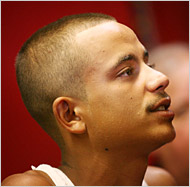 As Congressional Democrats struggle to muster the gumption to just say no to the whims of this wayward President, we have to admire one struggling 20-year-old camp counselor, who simply aspires to pay for his training in automotive repair.

Here’s how it played out in the White House situation room:

Dana Perino: Mr. President, great news! A bridge collapsed in Minneapolis and only a handful were killed. Let’s high tail on down there to show the American people just how compassionate you are.

W: Are you sure it’s necessary. I mean it’s no Katrina. Also, do I really have to leave Crawford in August? It’ s just getting nice n’ toasty down here.

DP: Look, let’s not make the same mistake we did in New Orleans. And it’ll be a nice reprieve from all the Beltway investigations.

W: How do I splain how all the money for domestic infrastructure improvements has been siphoned off to fight for freedom and democracy in Iraq and Afghanistan?

DP: Good question. I have an idea. Let’s organize a photo op with that camp counselor who pulled those kids from the bus. We don’t even need a banner. The collapsed bridge as a backdrop should do us just fine. Also, he’s Hispanic, which could score us some points on immigration reform.

W: Isn’t that a dead issue?

“Mr. Hernandez was not available to comment on the offer; Ms. Schwartz said he left town for northern Minnesota late on Friday, overwhelmed by the attention and concerned that his co-workers were being overlooked. He spent the weekend fishing.

When President Bushâ€™s staff contacted him to request a photo opportunity, “He was just, like, â€˜Nope,â€™ ” she said.