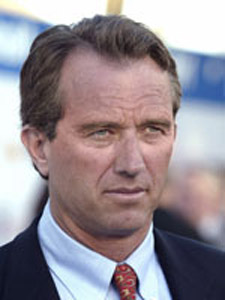 Cameron from “Ferris,” no doubt.

I’m a huge fan of Robert Kennedy Jr. His tireless work as chief prosecuting attorney for the environmental group Riverkeeper and the meticulously researched article he penned for Rolling Stone exposing the treacherous electoral abuses in Ohio during the 2004 Presidential elections cemented my admiration for the scion of America’s most fabled (and feebled) first family.

I’m therefore following with ample curiosity Mr. Kennedy’s crusade to overturn the murder conviction of his less-than-noble cousin Michael Skakel who today sits in a prison for the death of teenaged Martha Moxley more than 30 years ago.

“‘If I thought that Michael Skakel was guilty, I would say it publicly,” Kennedy said. ‘He’s incapable of telling a lie.'”

The latest effort arrives with new tape-recorded evidence that appears to implicate others in the gruesome murder. Featured on the recording, casting doubt on Skakel’s guilt, is another famous name associated with an attack on a female. Gitano “Tony” Bryant apparently is a cousin of LA Lakers star Kobe Bryant, a relationship the latter’s agent refuses to verify.

There are some PR pundits who will point to the reputational risk of Mr. Kennedy’s decision to overtly insert himself into this sordid affair. After all, the publicity surrounding the 2002 trial didn’t exactly position Mr. Skakel as a rightful heir to Camelot. (He’s the son of Ethel Kennedy’s brother.)

On the other hand, Robert Kennedy Jr. strikes me as someone whose convictions and beliefs dictate his actions — no matter how deleterious they may be to his public persona. You might call him a profile in courage. Let’s hope his efforts on behalf of his wayward cousin don’t backfire.