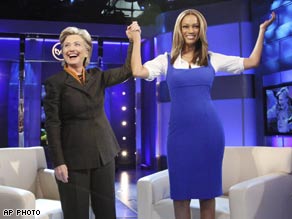 When working with a bona fide newsmaker, PR counselors often have the luxury to choose which media outlets merit access to their client. The smart PR types are quite judicious about whom they court. The not-so-smart ones are under the illusion that more equals better — a strategy often best suited for B and C-listers.

But this missive concerns A-listers, and in particular the junior Senator from New York and would-be first female President. In recent days, we watched Mrs. Clinton bask in the supposed safety of The Tyra Banks Show, an attempt to counter Oprah‘s galvanization of two key demographics (let alone a continuation of her crying game).

What emerged, however, were fresh (10th anniversary) quotes about Sen. Clinton’s reaction to her husband’s darkest days dilly-dallying in office. Separately, we learned that Mrs. Clinton reneged on a photo shoot with the fashionista’s fashion bible.

“We were told by Ms. Clinton’s camp that they were concerned if Clinton appeared in Vogue that she would appear too feminine.”

The spurned editor responded by calling the candidate to the carpet. (Red, we presume.)

“Imagine my amazement, then, when I learned that Hillary Clinton, our only female president hopeful, had decided to steer clear of our pages at this point in her campaign for fear of looking too feminine. The notion that a contemporary woman must look mannish in order to be taken seriously as a seeker of power is frankly dismaying.”

The PR advisor often bases his or her interview recommendation on the potential receptivity the outlet’s host, format and audience will have to the newsmaker’s POV. You’re not likely to see Mrs. Clinton stopping by Hannity & Colmes for a chit chat anytime soon. (Though I’m certain she’d whip those bully-pulpit neo-journalists’ butts.)

My beef with Mrs. Clinton’s media/messaging strategy lies less with her handlers’ (mis)calculated choice of interviewers, and more with the message itself.

Forget about your Democratic rivals, Mrs. Clinton, and don’t be smitten by the timely (and temporary?) bump your recent show of emotion produced. Take aim squarely at the enemy and his surrogates who so desperately and deceptively desire to perpetuate their historical assault on our nation’s values and security. This is how you’ll capture the rank and file of Democratic (and other) voters. Know thy true enemy.