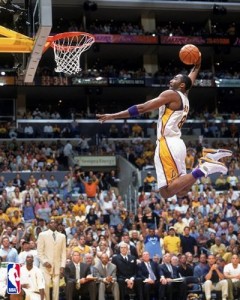 While some of the most viral YouTube clips come from the cameras of consumers — think Diet Coke and Mentos (5.6M views) or that drowsy Comcast repairman (1.2M views) — consumer-facing companies also are vying for that elusive virality and the boffo audience now residing on the dominant video sharing site. In fact, today there isn’t a brand marketer who isn’t seeking that magic formula for achieving branded video nirvana.

The stewards for one of the world’s best-known and most-esteemed brands, though no longer among the top ten, appear to have found the right mix. Not only has Nike produced a cool video, but it has the added element of deception, which creates controversy, which translates into publicity and even more video views. Sarah Money of MediaPost reports on the Aston Martin leaping Kobe Bryant spot for Nike:

“The 53-second video showing Bryant bounding over an Aston Martin has become a hit on YouTube, garnering nearly 2.5 million views in its different versions. In just a few weeks, it’s sparked lengthy-albeit fairly moronic-debates among viewers about whether it’s real or not.”

“Just on the basis of word of mouth-are they building buzz and creating conversations? – it’s doing quite well.”

But he says it isn’t without risks.

“This is the double edge sword of word-of-mouth and consumer-generated media. This is the new epicenter of consumer attention, but it doesn’t always cut in the brand’s best direction.”

While I too take some issue with the deceptive nature of the spot — it isn’t real — the (intentional?) controversy creates the requisite buzz without which the video wouldn’t have captured the fleeting attentions of those millions of YouTubers. Just don’t try this stunt at home.