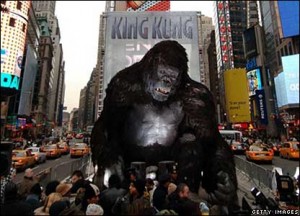 Since its opening late last week, “King Kong” has endured more than an oversized gorilla’s share of disappointing news from the box office. The presumed blockbuster movie took in $50 mill over the weekend — a respectable number nowadays, but much less than predicted. Could it be that the pre-release hype regarding box office potential actually hurt the film’s prospects by raising the bar so high that anything short of Titanic-sized receipts would be deemed a failure?

Of course in the days leading up to the release, potential moviegoers were subject to the usual TV appearances by the stars and the film’s celebrated director. Then there was the flash bulb-popping premiere/photo-op in midtown Manhattan, followed by a spate of national stories predicting a record take at the box office. It was this last messaging strategy that struck me as odd. Sure, network interviews and a star-studded opening event, followed by strong critical reviews, typically suffice for putting fannies in seats. (In fact, some believe that the last item is all that’s needed.)

But I can’t recall such a pervasive media campaign touting a film’s financial success prior to its actual release. Was this a mistake? Hindsight is 20/20, but my hunch is that this self-fulfilling prophetic approach to marketing ultimately had a deleterious impact in the all-important, 2nd week “legs” department. Kong’s rave reviews alone might have propelled it to the top of the Empire State Building and back.