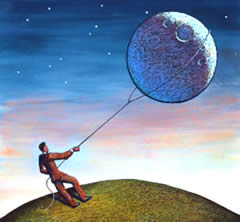 As if its market cap was not high enough, Google announced yet another tool in its arsenal of weapons designed to capture more eyeballs and thus ensure revenue growth. From a PR perspective, the timing of the Google Moon announcement — to coincide with the first lunar landing — propelled this story higher than it might have climbed had it not leveraged the historic date.

But it wasn’t just the date that added to the news value of this story. (After all, Google makes news of one kind or another regularly.) This announcement also coincides with the Space Shuttle launch, Star Trek Scotty’s death wish to have his ashes blasted into space and the monthly appearance of the full moon.

Now that Google has the Earth and the Moon, maybe the Mountain View-based company should consider moving its headquarters to Sunnyvale?