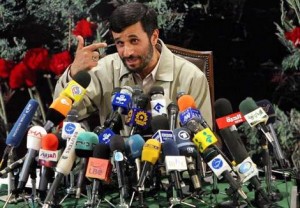 A while ago I read an insider account of Yasser Arafat’s approach to wooing the court of public opinion. In essence, the report confirmed something I had long suspected: anything that emanated from the mouth of this dead terrorist was not to be trusted.

In the piece, Arafat apparently admitted privately that he would say or do anything, including accepting Israel’s right to exist, to deflect from his real goal of seeing the Jewish state wiped off the map.

His hand-shaking photo-ops with Israeli and American leaders were all a ruse to mask his true intentions. (If you don’t believe me, take a look at the English-language translations of the incendiary speeches he regularly delivered in Arabic to the Palestinians in the West Bank and Gaza.)

In America, we take for granted the truthiness of what comes out of the mouths of our leaders. When we sense deception or distortion, we historically counted on the fourth estate to ferret out the truth. At least that’s the way it worked until the Bushies came to the Beltway.

Today, with mainstream journalism in a state of flux and with many world leaders granted a license to deceive (partly as a result of the media deception practiced by this administration), the public must rely on other, less pervasive (but hopefully more viral) means to learn what’s real and what’s not.

But today’s rant comes back to Arafat and his propagandist successors, notably Mahmoud Ahmadinejad. We all heard about Iran’s ballistic missile test this week. Well, it seems that the launch was not all it was trumped up to be (excuse the pun).

In other words, the Iranian money shot showing four launches was doctored by Sepah News, “the media arm of Iranâ€™s Revolutionary Guard.” In reality, one of the four missiles misfired, but the image that moved on the Palestinian-sympatico news agency, Agence France-Presse, and was picked up around the globe, showed all four had successfully fired. AFP has since retracted the veracity of the image.

Unfortunately, we probably won’t hear much about this here since it has limited appeal to most Americans’ news sensibility, at least compared to let’s say the doctoring of a Katie Couric photo.