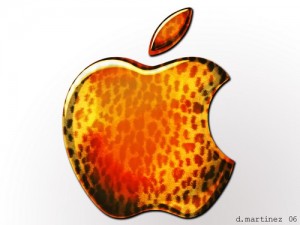 A cursory glance at what some top tech industry analysts are saying about Apple’s new Leopard operating system indicates an evolutionary, not revolutionary boost to the Mac, the computer industry’s biggest market share gainer.

Apple’s venerable product line may no longer have the same brand cache as its “i” siblings, but make no mistake: Mac sales represent the biggest contributor to the company’s bottom line. And it’s only going to get bigger.

‘I would put this under the category of, it’s a nice upgrade, but it’s not a game-changer,’ said Piper Jaffray analyst Gene Munster.”

Gene, I disagree. I predict that sales of the Tiger-replacing, Leopard-infused iMac, Mac mini (?), MacBook, Mac Pro, and MacBook Pro will raise more than a few eyebrows when overall holiday computer sales are finally computed.

“If Apple is able to deliver on all of the stuff they are showing to date with Leopard, there is no doubt in my mind they will have another hit on their hands,” said Michael Gartenberg, research director at Jupiter Research.

Already, Mac sales account for more revenue than the iPod, iTunes, or the iPhone, and that number will grow, due primarily to three factors: the recent Mac upgrade, Leopard as catalyst, and lingering consumer disaffection with Windows Vista. (Even so, some believe Apple already missed the window to capitalize on Windows’ missteps).

“Some have said Apple is pushing the Mac out of the way” for other gadgets, said Rick Shim, an analyst with market research firm IDC. “I wouldn’t say that’s the case at all. The Mac is still central to their universe.”

What intrigues me most about the arrival of Leopard is the different PR tack Apple appears to be taking in letting this Leopard out of its cage. The upgrade will not roar onto the scene with Apple’s usual multi-million dollar, multi-media stage production starring Steve Jobs. In fact, Apple already has leaked a sneak of the product on its website.

Compared to Vista, which sought to out-hype the over-hyped launch of Windows 95 — and succeeded — (what does this tell us now?), Leopard may seek its buoyancy through a subtle intro and, let’s not forget, Apple’s millions of eternal evangelical enthusiasts everywhere.

Then, of course, I could be wrong. The PR/marketing command-and-control crowd in Cupertino could have something boffo up their collective sleeves (though I would advise against it). Let the momentum build from the ground up. In either case, the buzz already brews, which bodes well for AAPL in the crucial 4th quarter.