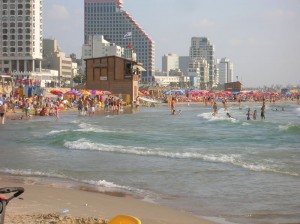 I’m not a big MySpace fan, but there are plenty who are (for now). I much prefer FaceBook for my boys given some of the safeguards in place there.

Relatively quietly (unless you consider Ynetnews.com a mainstream media outlet) the State of Israel has opened an outpost on News Corp’s dominant and youthful social network. And guess what? It’s nicely done (and it’s unarmed…I mean disarming).

The site is reminiscent of an initiative my digital video-enabled friend Marco Greenberg conceived for the Israeli government more than a year ago. It was the first government-sponsored video blog and it allowed ordinary Israeli citizens to post their real-life video on subjects including the arts, science, sports, lifestyle, etc. Not unexpectedly, however, that nation’s political bureaucracy soon suffocated the promising project. It’s morphed into this.

But back to the State of Israel page on MySpace, Ynetnews also reports that:

“Among the first to join the friend list were official fan clubs of actors George Clooney, Eddy Murphy and Leonardo DiCaprio, and singers Matisyahu and Regina Spektor.”

At a time when the mere mention of Israel unjustly conjures up images of death and destruction, it’s refreshing to see a more truthful depiction of life in that peace-seeking nation. It’s also refreshing to see the government wise-up to the use of digital video to showcase humanity, a tactic its adversaries have long used to showcase inhumanity.