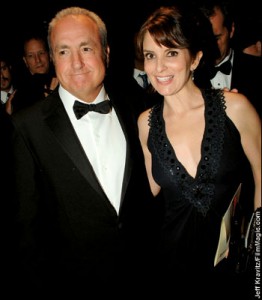 Say it ain’t so, Lorne Michaels. You invented and then re-invented television’s most valuable piece of youth-oriented programming, and I hear you’re poised to betray those who’ve made it so.

We all know how Tina Fey’s artful, yet scary take on one vice presidential candidate has opened America’s eyes to the real Sarah Palin, even more so than any of the interviews her handlers have permitted.

And by so doing, the 34th season of SNL has struck such a resonant chord with its link-happy, socially networked audience that the show today rightfully revels in its game-changing role in the upcoming elections. Moreover, SNL’s success in the audience and advertising-challenged broadcast medium stands in contrast to cable TV’s reigning youth-influencer kings: Stewart and Colbert.

Early word this morning has it that Mr. Michaels has agreed to turn over his most vaunted stage to Ms. Palin, and thus create an opportunity for her campaign to re-humanize her sagging public persona. Her expected appearance this weekend will no doubt boost buzz and show ratings, in spite of the potential political consequences that will alienate SNL’s legions of loyal fans.

Who can blame Mr. Michaels for exploiting the campaign for a pop in the ratings? (Hey, a celebrity is a celebrity. Right?) The network brass no doubt will be pleased. And didn’t Letterman, an Obama supporter, yuk it up this week with Sen. McNasty for the very same reason? Obama on Leno should as well.

All I can say is that I hope SNL recognizes the influence it yields and stays true to its audience by sticking it to Palin. (I’m sure the humor will go over her head.) I was relieved to see that Letterman didn’t give McCain a free ride. If there’s one saving grace, it’s the L in SNL. No command and control for Ms. Palin here.