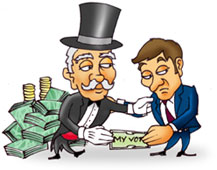 I am a big fan of PBS. My children were reared on it, and the longer-form “Newshour with Jim Lehrer” gives the day’s top stories their just due. Also, let’s not forget about “Antiques Roadshow” or “Live from Lincoln Center.” It is therefore discomforting for me to think that the network’s budget — and thus its programming — may be cut as a result of partisan bickering.

Today’s front page story in the New York Times touts the revelation that the head of the CPB paid two “lobbyists” to advance his agenda. The description of the hired guns as “lobbyists” doesn’t appear accurate. Merriam-Webster defines lobbying like this: to promote (as a project) or secure the passage of (as legislation) by influencing public officials.

The two men in question did not appear to attempt to influence public officials to help the passage (or defeat) of legislation. One was analyzing program content, and the other was assessing the position of a congressman on a piece of legislation. Perhaps it’s mincing words (what would Bill Safire or Bill Moyers say?), but since no contact seems ot have been made between these two men and any lawmaker’s office, the term doesn’t exactly fit. Public Affairs strategists or PR advisors may be more apt.