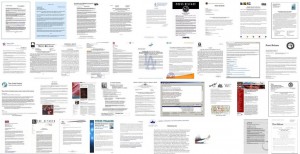 Two posts caught my attention early this week. Both offered fairly dour assessments of the practice of public relations, and as expected, both were heavily re-tweeted into the media echo chamber.

The first, from a trade journalist who no doubt has been on the receiving end of myriad PR come-ons and spam, declared that the press release is dead. The murderer? Twitter, of course.

In his follow-worthy Ad Age column buzzily titled “RIP, the Press Release (1906-2010) — and Long Live the Tweet,” Simon Dumenco attributes Twitter’s ascendancy and the press release’s failure to two events this past summer:

“The long-suffering, much-maligned press release, I’d argue, finally died this summer, thanks particularly to JetBlue and BP, with a little moral support from Kanye West and just about every other celebrity with thumbs. (Of course, press releases will probably continue to stumble along, zombie-like, for years to come, because too many PR folks are still heavily invested in grinding them out.)

There’s no question that a robust and RT-happy Twitter following can help publicly propel one’s musings (PR and otherwise). We’ve seen how Ford, Zappos, Pepsi, let alone countless celebs and others have embraced Twitter. Some PR agencies have even factored the size of one’s Twitter following in their hiring decisions. (We’ll save that post for another day.)

Yet the stalwart two-page press release has a rightful place in the PR toolbox…just not the one it has enjoyed since Ivy Lee’s day. I mean does anyone reasonably expect a press release to catalyze and drive news coverage anymore?

The press release, unlike its 140-character cousin, offers communicators a simple-to-follow format for framing and providing context to a piece of news. Add some multimedia assets, and the recipient has all that’s required to wrap his/her arms around a story. The same can be said for a blog post or drop.io presslift page. I’m not so sure about a tweet, even if it’s TwitPic, bit.ly or video-infused.

The second post that stirred PR peeps’ passions came from a friend and someone for whom I have great admiration — a PR pro who ironically built his personal and firm’s reputation on the premise that the traditional press release was dead. Todd Defren‘s edgy, all-capped title “THE CREATIVE DESTRUCTION OF PUBLIC RELATIONS” pretty much summed it up:

“The distinct discipline of Public Relations no longer exists. With extraordinarily rare exceptions, the definition of PR was conflated with â€œMedia Relations.â€ And while Media Relations will ALWAYS be a critical component, its standing as a standalone practice is driving towards extinction.”

Both Todd’s and Simon’s posts missed the point about public relations. The discipline is not about press releases or Twitter feeds, or even media relations. These are just tools and tactics.

Public relations is more about the resonance of the message (and hence the quality of the engagement), than the channel in which that message appears. Sure, we cannot ignore how the public increasingly lives its collective lives through Facebook, YouTube, Twitter, smart phones and iPads.

Yet, the real PR talent has always resided with those who could create cogent, concise, and compelling content that is accurate, authentic and ultimately action-producing. What is said always trumped where it’s said or how it’s delivered.

So let’s forget about the press release versus Twitter or media relations versus a Facebook of YouTube page. Whether it’s paid, owned, earned or shared communications, one will fail to build a positive branded “media” presence for his or her clients without words, images, graphics and/or video that resonate and connect.