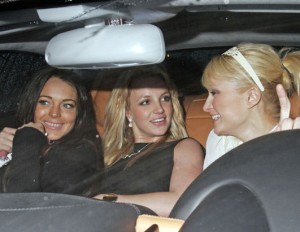 Defamer gives Lindsay Lohan a pat on the back for not delegating to her publicist her rambling homage to the late Robert Altman. Judging from the reaction it prompted, she probably should have.

Or, rather, her publicist might have weighed in more assertively before approving the release of the peripatetic prose. Hey, maybe these were her publicist’s words? Here’s how I imagine it unfolded that fateful night on the town:

LL: Shut up, everyone! I hear my new Paris ringtone! Hulllo.
LS: Lindsay, can you hear me?
LL: No, shpeak louder! I can’t hear ya.
LS: Lindsay, where are you?
LL: Shut up, Britney! I’m trying to talk. Hello?
LS: Lindsay, it’s Leslie. I need to tell you something. I promise it’s really important this time. Where are you?
LL: Ummm. I think I’m at Tao. No, can’t be. That’s Vegas. Hey, everyone. Where are we? No wait wait. I know. We’re at Butter…ummmm, or is it Soho House? No. Let me think. Yeah. That’s right. We’re in L.A. Hyde? Whatever! What’s up, Leslie?
LS: Robert Altman died today.
LL: Oh no. What will happen to the band? Hey, didn’t he die years ago? Something about a peach truck.
LS: Nooooo! Not Duane Allman, you tw…Robert Altman, the director. You know. Prairie Home Companion. Prete a Porter.
LL: Shush up everyone! I can’t hear! I think they said Robert Altman is dead.
LS: Right! Reuters and AP just called for a comment from you. What do you want to say?
LL: I’m drunk with sadness? No. Those nasty low-life bloggers will twist my words.
LS: Why don’t I just release a statement from you saying that you’re saddened by the loss of such a great man and you want to extend your heartfelt condolences to Mr. Altman’s family.
LL: No way! That’s so cliche. Everyone will say that! I’m Lindsay Lohan. It needs to be first-hand and personal, like I really knew him well. How’s this? Bob was, um, like the father I used to have…before he got locked up. Oh Leslie, I’m starting to cry.
LS: Lindsay, I’ve told you a hundred times. Don’t ever talk about your father…never! Now pull yourself together.
LL: Leslie, I have a new Sidekick. This will be good practice using the teeny weeny keyboard. Oh My God! The DJ’s playing K-Fed. Let’s get the hell out of here everyone! Leslie, I’ll send you something.
LS: Hurry up, please. The wires want to move their stories and your inclusion could be a boost to your career.
LL: OK I’ll work on it in the limo.
(One hour later)
LS: I just received what you wrote. it’s a little, uh…long.
LL: No way! Paris, Britney and I spent more than 15 minutes of fame writing it. We think it’s perfect.
LS: Bububu but, Lindsay.
LL: If you’ve got issues, Leslie, have someone else in your office send it! Gotta go. Ciao!

In defense of her client, Sloane says, “When I got the reports that (Altman) had died, I reached Lindsay on her cell phone, and she had no idea. She was devastated. She started crying. She quickly put something together on her Blackberry.”Here was a girl who found something special in this man that she felt so close to. And she was completely shocked and blown away that he just died. It was written very quickly, and it was from the heart.”