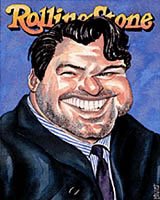 “Page Six” reports that the namesake of Wenner Media personally interceded in pulling a bait & switch on Jessica Simpson’s ex Nick Lachey. The reality TV star wound up on the cover of US when he allegedly was promised a cover of Rolling Stone.

Mr. Lachey recently swapped his Hollywood PR firm, Baker Winokur Ryder (the fun side of Ogilvy PR, which is part of WPP Group), for Ken Sunshine , a former NYC political PR operative who has toiled for the likes of Streisand, Pitt/Jolie, and other sometimes A-listers.

According to the confusing item, Mr. Sunshine’s minions inherited negotiations for a Rolling Stone cover, but were angered when Jann Wenner allegedly decided to migrate the piece to the cover of his less esteemed sibling US Magazine. (Some media types would call this brand synergy.) The reason: the hunky star didn’t dish deep enough on his ex-wife.

There’s something fishy here. It’s hard to believe that this switch would have been made without some cognizance on the part of the PR firm orchestrating the interview. It’s like if you arranged an interview with TIME, and it ended up in People. (Indulge me on the Wenner Media – Time Inc. analogy.)

Free-lance journalists often recycle celebrity interviews, travel pieces, etc. for sale to smaller or foreign publications, but rare is the day when a hot celebrity’s handlers lose sight (or get snookered) like this. Perhaps Mr. Lachey should re-think his switch of agencies? I bet there’s more to this story than met Page Six’s eye.