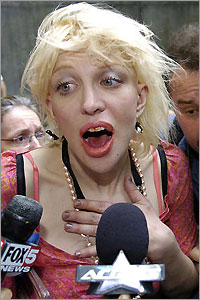 Comedy Central’s raunchy roast of Pamela Lee Anderson was an unqualified hit for the ascendant cable network, home to Jon Stewart. Not only did it produce some powerful ratings, but the column fodder and media coverage wouldn’t stop. Congratulations to Tony Fox and the PR team at the comedy network.

Now for the dark side of that event: Courtney Love. Much of the scuttlebutt emanating from the special revolved around the bizarro behavior of Ms. Love during the roast. (One comic quipped: “How is it possible that Courtney Love looks worse than Kurt Cobain?”) It’s not that we’re not used to seeing Ms. Love being forcibly restrained or in a state of utter incoherence from time to time, but who had the idea to put this wacko on camera throughout the special?

Now we learn that her charade of sobriety has come to a jarring end. Today she was ordered back to re-hab, and may even do jail time. If anyone has earned it, she has. There’s no sympathy here. No one likes a liar. Just ask Ms. Wilbanks or Mr. Buttafuoco.