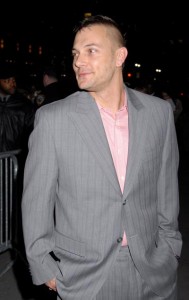 It seemed like the right thing to do. A Hollywood publicist named Michael Sands resigned the PR chores for Kevin Federline (pictured) and his lawyer Mark Vincent Kaplan because the two have gone too far in the custody battle. From Hollywood Scoop:

He explains, “‘This is overkill, it made my stomach turn. Every time we had to go into court, yes we have to protect the kids. But every mother, healthy or unhealthy should see their kids… You can’t blame someone for mental illness.'”

Sounds reasonable. A veritable Hollywood flack with a conscience…or so it seems. Yet, separately, TMZ reports:

So let me try to understand this. Between repping Federline or Lutfi, Mr. Sands opted for the Spears Svengali, the man accused by Britney’s trailer park parents of drugging their prodigal daughter.

In his first line of defense of Mr. Lutfi (watch the video), Sands claimed:

“…that all drugs Sam fed to Brit were ‘prescription medication cocktails,’ and that Lutfi’s main goal is to ‘save Britney Spears’ life.'”

It’s messy business, but some specialized spectrum of the PR industry has to do it. Just glad it’s not me.