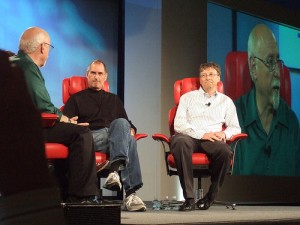 With all the rasp attention given to the reunion of the original Apple-PC guys, it would be hard for most non-attending bloggers to find an editorial opening not already filled.

Nonetheless, I do have two observations about the Jobs-Gates gabfest at the D: All Things Digital Conference hosted by The Wall Street Journal:

1) This was one staged event in which the appearance of two CEOs actually had a multiplying effect in terms of generating media interest, hyperbole.

2) The Journal’s media management and its own blog/vlog could be a model for controlled transparency at future press events.

To explain, Mr. Gates and Mr. Jobs certainly have not lacked in the number of respective high profile public appearances. Yet, together, they struck a resonant chord among the myriad chroniclers of all things digital that transcended what either could have achieved unilaterally. It was a magical media moment (Thanks, Rafat, for uploading your images on Flickr.)

As far as The Journal’s own reportage of this reunion and other event highlights, the D blog had a sensible user interface and all the content required to satisfy inquiring minds. Sure, D also attracted more than a fair share of A-listers. Even Arianna and the politicos at Huffington Post jumped on the D-driven blogging bandwagon for this one. By providing unfettered access to the digital kingdom’s true movers & shakers, The Journal made it most difficult for any snarkiness to surface. (And which blogger doesn’t want to be invited back next year?)

Finally, I very much liked what George Lucas had to say about the proliferation of video content, and the two distinct flavors in which it arrives. Here’s what Rafat heard from the creator of “Star Wars:

“There are two sorts of entertainment: circus and art. Circus is random…that is what is on YouTube. Throwing puppies on a freeway, we say it in film lingo. You watch it happen. It is voyeuristic. Sort of what American Idol is. Art is where a particular person contrives a situation and tells a story and hopefully that story reveals the truth behind the facts. Voyeurism only tell you the facts.”

So I ask, are our digitally inclined client marketers better served through the creation of art or circus?