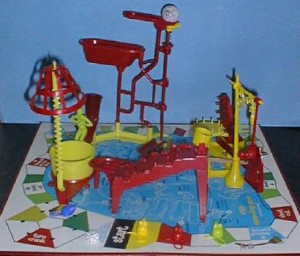 It’s a chilly but spectacular sunshine-filled Sunday in New York. While waiting for the Giants-Dallas game to start, I was checking out the list of attendees for Tuesday’s night’s NYC bash hosted by Rafat, Staci and the gang at PaidContent.org.

The PDF file is organized by job title, and judging from the number of CEOs, COOs, heads of marketing and biz dev, I would say that PaidContent has laid down the gauntlet as the must-read for all content digeratis. (But I’ve been saying this for a while now.)

While on the subject of digital media, my brother Steve, who turned me on to Ziggy and The Who back in the day, sent me this fab video clip that purports to be some kind of Rube Goldberg music contraption made from farm equipment, but is really a computer animation. Cool stuff, nonetheless. Here’s the faux-background:

“This incredible machine was built as a collaborative effort between the Robert M. Trammell Music Conservatory and the Sharon Wick School of Engineering at the University of Iowa. Amazingly, 97% of the machines components came from John Deere Industries and Irrigation Equipment of Bancroft Iowa, yes farm equipment!

It took the team a combined 13,029 hours of set-up, alignment, calibration, and tuning before filming this video but as you can see it was WELL worth the effort.

It is now on display in the Matthew Gerhard Alumni Hall at the University of Iowa and is already slated to be donated to the Smithsonian.”

The Smithsonian denied its existence, but maybe it merits a place at some museum in Second Life. Enjoy it for what it is (and just watch as it catches fire online, then migrates to the MSM.)